In the early 1980s the tri-state region never experienced a stink bug infestation. Why..? Because, the brown marmorated stink bug (BMSB) wasn’t introduced into the region until 1998. Moreover, the stink bug wasn’t even introduced on our continent until this time. In 1999, local New Jersey scientist witnessed the disturbing pest across the river from Allentown in Philipsburg, New Jersey. In 2004, Anne Nielsen, an extension specialist in entomology at Rutgers University, monitored an invasion of stink bugs as they came into Philipsburg, NJ.

Now, stink bugs are everywhere—inside, outside, in your cars and in your homes. In the early 1980s a monitoring system was set up to track common vegetable pests in New Jersey. This monitoring system led to a large amount of maps around the semi-new invader. In 2012, scientist are now studying and analyzing these maps to stop the brown marmorated stink bug from pirating a broad range of fruit and vegetable in North America.

There is no coincidence the mid-Atlantic has seen record crop damage the past couple of summers. According to the Penn State Entomology department:

“This true bug in the insect family Pentatomidae is known as an agricultural pest in its native range of China, Japan, Korea, and Taiwan. Recently, the BMSB has become serious pests of fruit, vegetables and farm crops across the mid-Atlantic region and it is probable that it will become a pest of these commodities in other areas in the United States.”

At Rutgers University, George Hamilton, an entomologist and extension specialist leads a dedicated team that utilizes this valuable, historic mapping information to track the BMSB movement to help predict the future movement, vegetation and activities across other regions. Hamilton has generated maps from his team’s data, going back to 2010, but he can map any year going back to the 1980s-era. According to Hamilton, they can look at the 2004 invasion as if it were happening in real time. They can assess how fast the stink bug mates, how far it can move year over year. 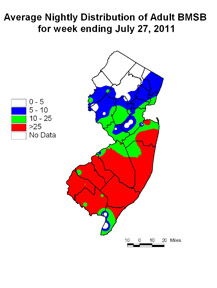 This New Jersey map shows the intense stink bug activity as of July, 2011. According to Hamilton, three years ago they started publishing these maps to help govern the potential risk to growers and their crops. As you can see in the image, the southern half of New Jersey was significantly infested as of this time.

Some “Do It Yourself” remedies include vacuuming up the stink bugs or flushing them down the toilet. However, the best way to seal your house is with Green Pest Solutions’ exterior pest treatment. Green Pest Solutions will safeguard your home against these mini-intruders with their Green Band Protection System, a customized and safe treatment program that will prevent stink bugs from entering your home.

For more information about regarding the mapping and the usefulness for forecasting please visit, http://www.northeastipm.org/about-us/publications/ipm-insights/scientists-draw-maps-to-stop-stink-bug-pirates/.