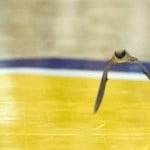 An unexpected visitor attended the college basketball game held in Milwaukee on Saturday. The rogue bat flew into the stadium, headed for the rafters and then proceeded to head to the second level after dive bombing towards the crowd on the main floor, perhaps looking for the best seat available. 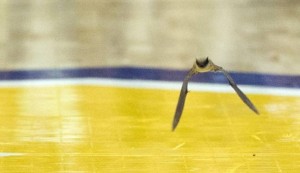 Players, spectators, and coaches reacted pricelessly to the bats presence, throwing towels at the bat, dodging the bat at all costs, and even singing songs to draw the bat out. After several failed attempts of trying to chase the bat out, a local pest control company was called out on Monday to capture and release the bat.

The pest control company had to go as far as to create a mock game setting in the empty arena to try to locate the bat, as the bat had gone into hiding after the lights had been dimmed to allow the team to finish the game. They turned on all of the lights in the arena and hard rock music, reportedly AC/DC’s Thunderstruck, was played. This seemed to do the trick as the bat left the rafters, heading towards the East Lobby of the arena where pest control workers were able to detain the elusive bat and send it out the door to fly away. The bat may have been an unwanted guest during this game; however it seems it has gained a celebrity status as there are now two Twitter accounts devoted to the bat’s wild and unexpected journey. The bat could not be reached for comment.