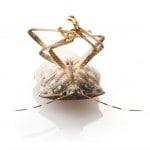 You’ve probably seen them crawling around your windowsills or flying inside the house. If you destroy them they expose a musty, defensive scent that has earned them their name – If you guessed stink bugs – you’re right! Stink bugs are looking for a warm place to spend the winter — perhaps inside your house.

Brown Marmorated Stink Bugs were first discovered in our Philadelphia area backyard. To be precise, they were first discovered in Allentown, Pennsylvania in 2001. According to the Pennsylvania State University Entomology department, they feed on fruit trees, ornamental plants, vegetables and legumes. These invasive pests are common throughout the mid-Atlantic region, especially in the fall! They are extremely hard to control because of their flying tendencies.

As of September 2010, Stink Bugs have been recorded from the following counties, although it is probable that they are in all counties:

How do I know if I have Stink Bugs?

Typically, stink bugs will emerge from cracks under or behind baseboards, around window and door trim, and around exhaust fans or lights in ceilings. Seal these openings with caulk or other suitable materials to prevent the insects from crawling out. Both live and dead stink bugs can be removed from interior areas with the aid of a vacuum cleaner – however, the vacuum may acquire the smell of stink bugs for a period of time. – Source Penn State College of Agricultural Sciences