What Are Spider Webs Made of? And More Fascinating Spider Facts 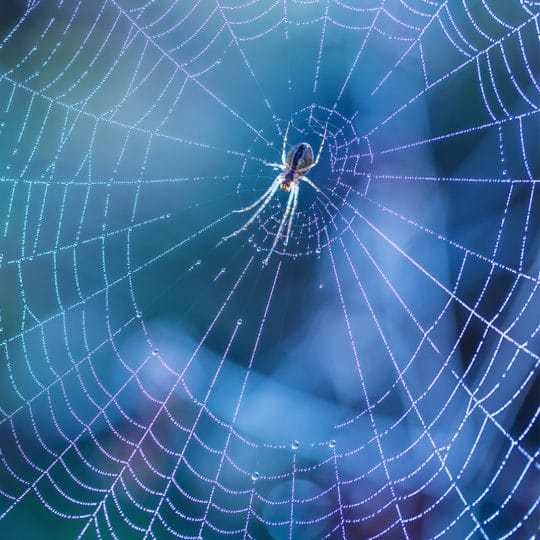 Spiders are a natural controller of pests and insects, serving a significant role in keeping populations of many pests in check. Without them, our world would be over-run by other insects. That’s not their only benefit; studying their webs have upped the fiber industry’s standards, even puzzling scientists. Some of the most interesting facts about spider webs include:

1. Spider Webs Are Made of Silk.

While they’re not the only insect that can create silk, they’re the only one that produces different types of silk for different purposes, including catching prey, swinging from place to place,  communicate with other spiders, and more.

It’s six times strong than high-grade steel per weight. The strongest silk belongs to Darwin’s bark spider, which also happens to be the strongest fiber on earth. Scientists are so fascinated by its strength that it’s a common study material. They haven’t been able to replicate it yet.

3. There Are Different Types of Webs.

Orb webs: These are the kind you’ll see in Charlotte’s Web. They appear to be a work of art.

Funnel webs: You’ll find these closer to the ground with a spider hoping to catch grasshoppers and other insects. They can grow to be a square yard.

Irregular webs: They’re not up for an art award. These webs are similar to the orb web, but they don’t have the same purposeful construction.

4. Not All Spiders Make Webs.

All spiders produce silk, but not all of them use the silk to catch prey, like the tarantula that actively hunts for prey. While all spiders have two claws on their feet, web-spinning spiders have three.

Humans should take note. When they are ready to rebuild their web, spiders eat the silk, essentially recycling it.

Spiders alone can’t keep your home pest-free. Contact the pest professionals at Green Pest Solutions to keep creepy crawlies away and kick them out—including those spiders that shouldn’t be anywhere near your family. Give us a call today at 877-636-9469 for a free estimate.