As most of you already know from the bites on your body, 2013 has been full of Mosquitoes. In fact, as of August 20, 2013, over 40 states including the District of Columbia have reported West Nile virus infections in people, mosquitoes or birds. According to the Centers for Disease Control and Prevention (CDC), a total of 296 cases of West Nile virus disease in people have been reported to the CDC. Of those 296 were 11 unfortunate deaths. Of the 296, 145 (49%) were classified as neuroinvasive disease (such as meningitis) and 151 (51%) were classified as non-neuroinvasive disease. 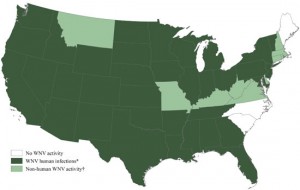 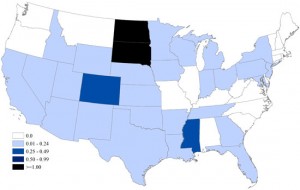 The map below portrays the Mosquito activity on a state-by-state level. In the United States, only three states show zero West Nile virus activity levels: Maine, Virginia and North Carolina.

In 2013, California leads all states with 87 reported cases (neuroinvasive and non-neuroinvasive). Of those, 5 turned into deaths. In our area, Pennsylvania has reported 3 total cases and New Jersey 2 total cases. West Nile virus is here to stay – please protect your family and pets today. Always feel free to contact Green Pest Solutions for to find out more on their Mosquito Control Program and the special offers associated with that. In the meantime, find out more about how you can protect against West Nile virus today with out Summer Tips!