With the recent cases of West Nile virus popping up around the United States, it’s a good idea we all get familiarized with this potentially deadly virus.

West Nile Virus is a disease spread by mosquitoes. The condition ranges from mild to severe.

Mosquitoes carry the highest amounts of virus in the early fall, which is why the rate of the disease increases in late August to early September. The risk of disease decreases as the weather becomes colder and mosquitoes die off. 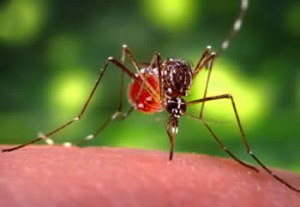 Although many people are bitten by mosquitoes that carry West Nile virus, most do not know they’ve been exposed. Few people develop severe disease or even notice any symptoms at all.

Risk factors for developing a more severe form of West Nile virus include:

West Nile virus may also be spread through blood transfusions and organ transplants. It is possible for an infected mother to spread the virus to her child through breast milk.

Mild disease, generally called West Nile fever, may cause some or all of the following symptoms:

These symptoms usually last for 3 – 6 days.

More severe forms of disease, which can be life threatening, may be called West Nile encephalitis or West Nile meningitis, depending on what part of the body is affected. The following symptoms can occur, and need prompt attention:

The most accurate way to diagnose this infection is with a serology test, which checks a blood or CSF sample for antibodies against the virus. More rapid techniques using polymerase chain reaction (PCR) may be used.

Because this illness is not caused by bacteria, antibiotics do not help treat West Nile virus infection. Standard hospital care may help decrease the risk of complications in severe illness.

In general, the outcome of a mild West Nile virus infection is excellent.

For patients with severe cases of West Nile virus infection, the outlook is more uncertain. West Nile encephalitis or meningitis may lead to brain damage and death. Approximately 10% of patients with brain inflammation do not survive.

Call your health care provider if you have symptoms of West Nile virus infection, especially if you may have had contact with mosquitoes. If you are severely ill, go to an emergency room.

Testing of donated blood and organs is currently being evaluated. There are currently no guidelines.