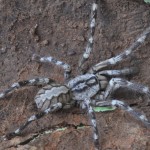 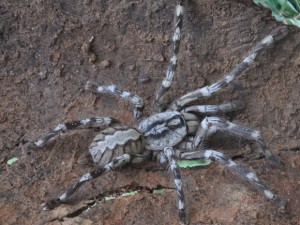 A large species of tarantula, roughly the size of an adult human face, has been discovered on the island nation of Sri Lanka. It boasts a leg span of 8 inches and holds enough venom to kill lizards, mice, snakes, and even small birds. The venom of this massive tarantula (Poecilotheria rajaei) is not lethal to humans.

The thought of a venomous spider the size of a dinner plate would be enough to give even the mildest arachnophobes the creeps, but many scientists consider this tarantula to be extremely fascinating and have made it the subject of considerable study.

These studies have focused on determining just how rare the newly discovered spider is, and if it really is a new species native to Sri Lanka. There is concern that the increasing habitat destruction is causing their numbers to decline. “They prefer well-established old trees, but due to deforestation the numbers have dwindled, and due to lack of suitable habitat they enter old buildings.” said Ranil Nanayakkara, co-founder of Sri Lanka’s Biodiversity Education and Research.

The spider was first officially discovered in 2009 when a local villager brought a dead male specimen to the team of scientists.