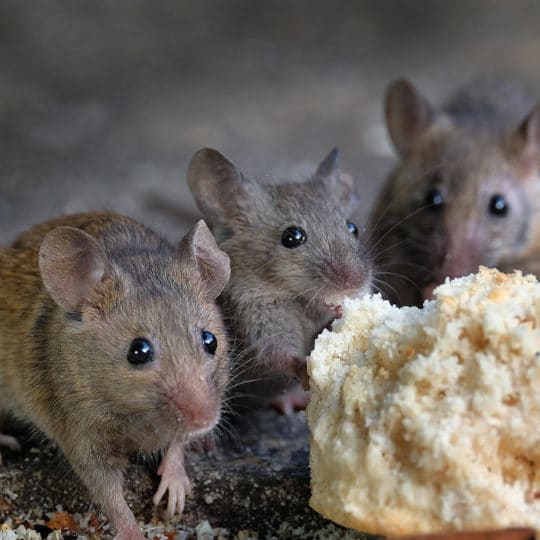 The Norway rat (Rattus norvegicus, also called the brown rat or sewer rat) is a destructive pest found in urban and suburban neighborhoods. These rodents eat and contaminate food, damage buildings and other property by their gnawing and burrowing, and may spread diseases that affect people and pets.

The presence of rats can be detected by droppings or evidence of fresh gnawing. Tracks can be seen in mud and on dusty surfaces. Runways and burrows may be found next to buildings, along fences or railroad tracks, and under low vegetation and debris

Norway rats are husky, brownish rodents that weigh about 11 ounces. They are about 13 to 18 inches long including the 6 to 8 1/2 inch tail. Their fur is coarse and mostly brown with scattered black on the upper surfaces. The underside is typically grey to yellowish-white.

Rats will eat nearly any type of food, but they prefer high-quality foods such as meat and fresh grain. Rats require 1/2 to 1 fluid ounce of water daily when feeding on dry food. Rats have keen taste, hearing and sense of smell. They will climb to find food or shelter, and they can gain entrance to a building through any opening larger than 1/2 inch across.

Rats have litters of 6 to 12 young, which are born 21 to 23 days after mating. Young rats reach reproductive maturity in about three months. Breeding is most active in spring and fall. The average female has four to six litters per year. Rats can live for up to 18 months, but most die before they are one year old.

In rare cases rodenticides may be used for control purposes

Roof rats, R. rattus, sometimes called black rats, are slightly smaller than Norway rats. Unlike Norway rats, their tails are longer than their heads and bodies combined. Roof rats are agile climbers and usually live and nest above ground in shrubs, trees, and dense vegetation such as ivy. In buildings, they are most often found in enclosed or elevated spaces such as attics, walls, false ceilings, and cabinets.

House mice are small rodents with relatively large ears and small, black eyes. They weigh about 1/2 ounce and usually are light brownish to gray. An adult is about 5 to 7 inches long, including the 3- to 4-inch tail. Droppings, fresh gnaw marks, and tracks indicate areas where mice are active. Mouse nests are made from finely shredded paper or other fibrous material, usually in sheltered locations. House mice have a characteristic musky odor that reveals their presence. Mice are active mostly at night, but they can be seen occasionally during daylight hours.

Because house mice are so small, they can gain entry into homes and other buildings much more easily than rats. As a result, house mouse infestations are probably 10 to 20 times more common than rat infestations. Effective control involves sanitation, exclusion, and population reduction. Sanitation and exclusion are preventive measures. When a mouse infestation already exists, some form of population reduction such as trapping or baiting is almost always necessary.

A key to successful long-term mouse control is limiting shelter and food sources wherever possible. Trapping works well, especially when a sufficient number of traps are placed in strategic locations. Trapping also can be used as a follow-up measure after a baiting program. When considering a baiting program, decide if the presence of dead mice will cause an odor or sanitation problem. If so, trapping may be the best approach. After removing mice, take steps to exclude them so that the problem doesn’t recur. Several types of rodenticides are available, which can be purchased as ready-to-use baits that typically are labeled for use against only house mice, Norway rats (Rattus norvegicus), and roof rats (R. rattus). Because all rodenticides are toxic to humans, pets, and wildlife, take special precautions to prevent access to baits by children and nontarget animals.

Trapping is an effective method for controlling small numbers of house mice. Although time-consuming, it’s the preferred method in homes, garages, and other structures where only a few mice are present. Trapping has several advantages as it doesn’t rely on potentially hazardous rodenticides, it permits the user to view his or her success, and it allows for disposing of trapped mice, thereby eliminating dead mouse odors that may result when poisoning is done within buildings. Snap traps are effective and can be purchased in most hardware and grocery stores. The simple, wooden mouse-size snap trap is the least expensive option, but some people prefer the newer plastic, single-kill mousetraps because they are easier to set and clean. Snap traps with large plastic treadles are especially effective, but finding the best locations to set traps is often more important than what type of trap is used. Traps can be baited with a variety of foods; peanut butter is the most popular, because it is easy to use and very attractive to mice.

In rare cases rodenticides may be used for control purposes.

As your local Green Pest Solution provider, we stand behind our Money Back Guarantee. We will respect your home as if it was our own and your peace of mind is important to us. If pests return so will we. If you are still dissatisfied with our service, we will refund the last regular payment. GUARANTEED! If You Need Us, Call Us!

See the difference a local company can make

Schedule your FREE In-Home Rodent Inspection and get $50 off the cost of your residential service treatment, call us at 877-636-9469 today.

Get My FREE Pest Evaluation Today →

Green Pest Solutions
4.9
Based on 4055 reviews
See all reviewsWrite a review

Green Pest Solutions
4.9
Based on 344 reviews
See all reviewsWrite a review
Extraordinary service with an outstanding technician. Courteous, professional, insightful and completely effective.

M S Monaghan
16:48 26 Jan 23
James was great! Was the first technician that came out that filled exterior holes. As a renter, thank you.

Kai Ciancio
17:17 25 Jan 23
Kevin Harple was very friendly and professional. He did a great job inspecting the house, identifying issues and explaining the treatment he put in place.

Jeff Cunningham
15:30 25 Jan 23
Hate to admit that I had bed bugs! But 2 years later and they are still gone. Thank you green pest Solutions!!

Mark Everline
22:31 23 Jan 23
I’ve been using green pest for years. They are always helpful and will answer any questions you might have. They will also come back anytime if there is an issue

Seankarey Powers
18:55 20 Jan 23
The technician, Mark was courteous and thorough when reviewing the house and applying pest control products. He made sure to look service inside and out. Very pleased with the visit.

Susan Bolzonella
20:36 19 Jan 23
Professional and courteous answered all questions in a friendly manner.

Dwight Perdunn
16:55 17 Jan 23
I have been a happy Green Pest customer for several years now. One mouse at night, get a cat- one mouse during the day, call an exterminator! Fortunately since having a small mouse problem several years ago, we have had no further issues. The... regular service appts have cut down in household spiders and i could not be happier with the techs and service. they are always professional and timely. finally, i like that the approach is pet and kid friendly.read more

Megan Morris
16:13 17 Jan 23
Henry is a fantastic technician . He takes great pride in being thorough and he always does a great job!

Leslie Siegel
14:12 17 Jan 23
The guy i had was dry knowledgable and answered ever question i had and made me feel great. I’m glad he will be the one to service our home while in contract. Thank you guys! The guy we have is Matt Z. And he’s the best! I don’t want no one else... coming to my besides Matt!read more

richie monroe
15:06 14 Jan 23
We've been using Green Pest for a couple years now. They are always very professional, on time, quick, easy to book, and explain everything thoroughly. Highly recommend!

D. Edward Ruffner
16:20 13 Jan 23
****EDIT****I never go back on my reviews, and while i honestly doubt id use this company again, their customer service person, Liz, is one of the best representatives ive ever had to deal with. She has gone above and beyond to fix this situation,... so thats why i changed to 5 stars.....maybe one day my decision about using the company again will change, If it does, or if i ever recommend this company to anyone, would be only because Liz change my outlook on the company by staying ontop on this matter....again, thank you Liz, you Def need a promotion.....for real!!Garbage, scammers......said they did my property, but I have cameras, they never did....they don't send ppl out to do anything, when they do, you have to watch then or they will skip rooms....they gave me 4 glue traps and charged me about 800+now....finally canceled the contract and now are trying to charge me 500+ more on top of the 300+ I've already paid them, Jill, the company rep, straight garbage person, 100% should be fired, ignorant as hell.....do yourself a favor and go with a reputable company, don't get scammed the way I did***Edit***After posting the review, remember, after posting the review, about my horrible experience with this company, I recieved an email from Liz. Liz was able to look at situation and understand what I was trying to explain. She was able to handle everything for me in a great manner for me, I appreciate everything she did to fix this for me. All the employees should be trained like that for real. Only reason I fixed the review was because of this employee and her willingness to help, I am changing my review stars. Tyvm for the help Liz, i appreciate you.read more

Bruce K
20:46 11 Jan 23
James was professional, friendly and reassuring.He answered all my questions and made a great suggestion that I will use for future reference.

$50 Off Premium or Premium Plus Program 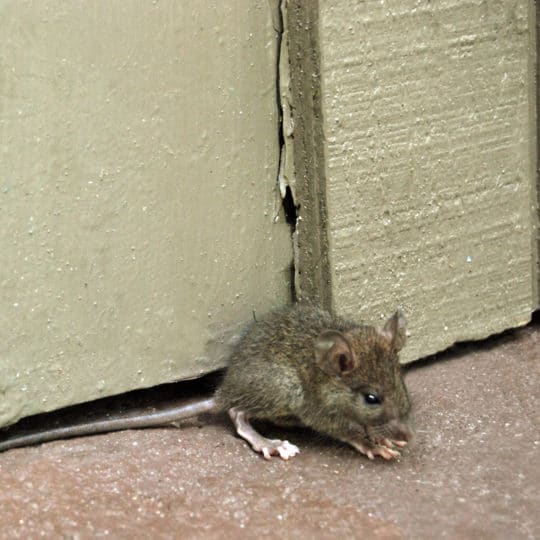 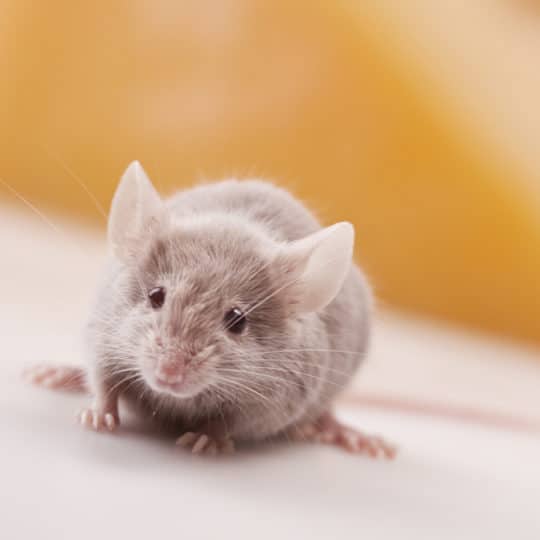 How to Keep Mice Away From Your Bed