A 77-year-old Burlington County resident is the first New Jersey resident to die this year from the mosquito-borne West Nile virus, authorities said Friday September 9, 2012.The death was reported as state and local agencies ramped up efforts to combat the virus, and New Jersey health officials announced that the number of confirmed virus cases had jumped from eight last week to 15.

In 2000, West Nile virus appeared for the first time in Pennsylvania in birds, mosquitoes and one horse. To counter the spread of the virus-which is transmitted by mosquitoes-Pennsylania has developed a comprehensive network. The network covers 40 counties and includes trapping mosquitoes, collecting dead birds and monitoring horses, people and, in previous years, chickens.

In Pennsylvania, 17 residents have tested positive for West Nile Fever and Encephalitis/Meningitis; one, an elderly Luzerne County man, died, officials said. According to Pennsylvania’s West Nile Control program, 75% of all cases are in the following counties: Bucks, Chester, Delaware, Lancaster, Lehigh, Montgomery and Philadelphia-that’s 18 of 14 cases. According to the program, of the 24 cases reported, 11 are male and 13 are female. 92% of those cases are reported to be within the age distribution of 18-79 years of age and 75% of the cases are between ages 40-79. The Pennsylvania West Nile Virus Control Program reports 17 of the 24 cases as Encephalitis/Meningitis and 7 of the 24 cases as West Nile Fever.

Insect experts and epidemiologist believe the mild winter followed by a hot and dry summer is core contributions to West Nile virus epidemic. In addition to the human cases document by the Pa. West Nile Control Program, a number of mosquitoes were caught in local nesting grounds and subsequently tested positive.

August and September were the peak times for West Nile virus. People are still urged to “Fight The Bite,” to prevent mosquito bites. 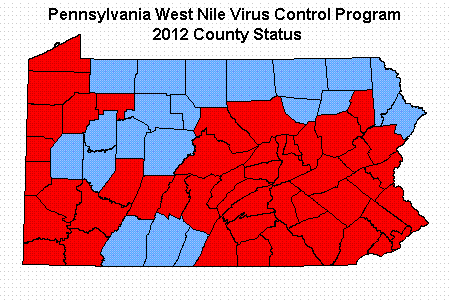 Always feel free to contact your number one local pest professionals Green Pest Solutions at 877-636-9469 with any questions regarding mosquitoes and or other pests and insects. We are your number one community pest and insect control resource. Ask about our year round pest protection services. Protect your home against pests, termites, ants, stink bugs, bees, spiders, bed bugs, rodents and much more!