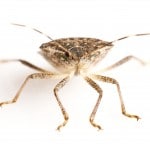 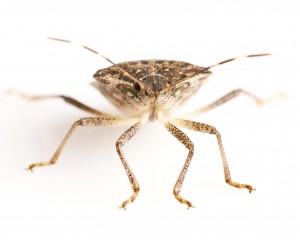 The Stink Bug, otherwise known as the Brown Marmorated Stink Bug (BMSB), is an exotic pest that has become somewhat unwelcomed in the mid-Atlantic states – especially across Pennsylvania homes. The stink bug was actually accidentally introduced into the United States from China or Japan. It is believed to have hitched a ride as a stowaway in packing crates. The first documented specimen was collect in Allentown, Pennsylvania in September of 1998.

The “Brown” in it’s name describes the mottled brown color it’s shielded backside. The “Marmorated” describes the coppery to bluish-metallic punctures noticeable on the surface of the head and body. And most of us know what follows next… “Stink” describes the pungent odor these pests release from scent glands when the insect is disturbed, and “Bug” describes this true bug with its piercing-sucking mouth parts.

Stink bugs become especially relevant in the mid-Atlantic states as soon as the weather becomes cooler. the BMSB are considered a “nuisance” pest due to their overwintering habits to find shelter inside homes and buildings where it’s warm. 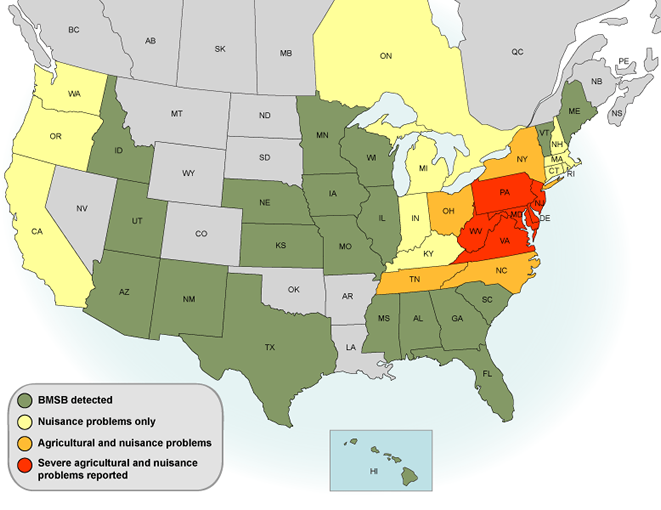 Prior to 2010, their plant feeding was scarce – not considered significant enough to warrant much attention from governmental authorities and researchers. However, that all changed in 2010: BMSB caused significant damage to agriculture crops as they are still spreading! They have been detected in 40+ states and Canada, creating severe agricultural and nuisance problems in the mid-Atlantic states and posing nuisance problems in at least 13 other states. 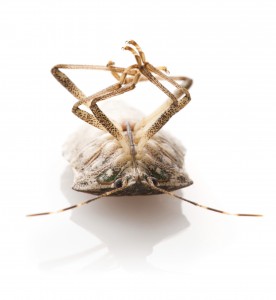 Large, magnified picture of stink bug on it’s shielded back

In 2010, many orchard growers in southern Pennsylvania reported BMSB damage to their peaches, apples, and pears to the tune of an estimated $37 million. Some suffered losses of up to 60%. In the few years since, these nuisances have considered to pose significant agricultural threats to farmers across the mid-Atlantic and approximately 25% of the United States outside the mid-Atlantic. Our Government agencies such as the USDA’s Agricultural Research Service has worked diligently to form a proposed BMSB action plan. The plan provides research directed towards determining basic biology and behavior characteristics, developing monitoring tools and fining effective management methods for both agricultural and urban settings.

As a home gardener “do-it-yourselfer” or Integrated Pest Management (IPM) advocate, what can you do in the fight against the Brown Marmorated Stink Bug? First, if you absolutely cannot stand these nuisances, contact Green Pest Solutions. We will help reduce your stink bug activity and make your winter months inside much more enjoyable. We will also give you $50 off Stink Bug Service! If you are in more of a “research” state, check out the Stop BMSB website. This website has current information about BMSB’s and links to websites about much of the research that is being conducted on BMSB. You can also find, stink bug basics, where they are currently being sighted, life cycles, orgins, photos, news, videos and much more!