They’re back: 17-year Cicadas to Swarm from Georgia to New York 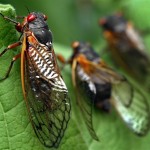 You probably haven’t seen them before. For the past seventeen years, cicadas were submerged underground. Well get ready, the “17-Year” cicadas are about to re-emerge along much of the East Coast to begin their remarkable life cycle. 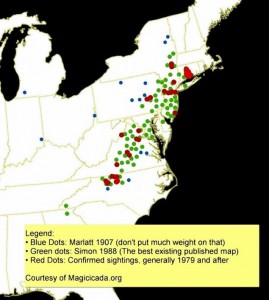 This year marks the emergence of a colossal number of the so-called 17-year cicada. We may all know them from their distinctive black bodies and green wingspan along with bulging black eyes and freakishly veiny skin. The emergence will span much throughout the U.S. east coast, from Georgia to upstate New York., roughly a 900-mile radius.

In central Connecticut, particularly dense concentrations of so-called Brood II cicadas, named Magicicads septendecim, should arrive between May and June, says Chris Maier, entomologist with the Connecticut Agricultural Experiment Station in New Haven. Maier has tracked the emergence of Cicadas since 1979 and again in 1996. He said they are next due in 2030, when he will be 81 years old. Maier also explained the first scientific recording of Brood II specimens was in 1843. 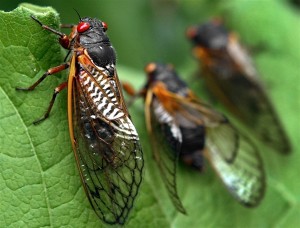 The arrival of the 1.5inch herbivores, flying adults occurs after a lengthy period of development underground as juveniles. After the maturing stage, males begin what cicadas are best known for: their acoustic mating signals or “songs.”

“When there’s a lot of them together, it’s like this hovering noise. It sounds exactly like flying saucers from a 1950s movie,” Chris Simon, professor of ecology and evolutionary biology at the University of Connecticut. So how exactly do they conduct their choir? To create their bizarre choruses, the male cicadas use ribbed tymbal membranes on their abdomens to produce the sounds, while females – lacking tymbals – click or snap their wings.

One theory behind their unique life cycle is that their emergency generates such an overwhelming colossal number that predators, such as birds, spiders, dogs and other insects can’t eat them all at once.

Although they may sound harmful, cicadas do not sting or bite and they aren’t harmful to crops. However, they may cause damage to young, smaller trees and shrubs if too many feed from the same vegetation or lay eggs in their twigs according to research published at www.magicicada.org.

Every 17th year, prior to their re-emergence, the cicadas build a tunnel exit to the surface. Once the soil temperature exceeds 64 degrees Fahrenheit the nymphs leave their burrows after sunset and settle on a nearby tree or shrub to being their final stage of adulthood.

To learn more about Cicadas and other green industry news visit our blog at www.greenpestsolutions.com/blog.