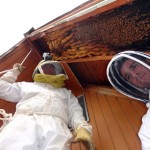 In Eden Utah, Vic Bachman witnessed the largest beehive he had ever seen in his beekeeping career. With 12 feet in length, Vic Bachman removed a colossal beehive in the eaves of a cabin in Ogden Valley. 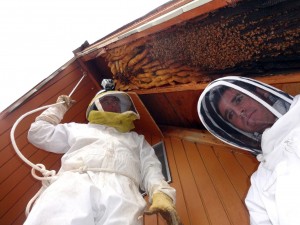 “We figure we got 15 pounds of bees out of there,” said Bachman, who said that converts to about 60,000 honeybees. Bachman was called to the A-frame cabin last month in Eden, Utah. While removing a panel that hid roof rafters, he had no idea he would fine honeycombs packed 12 feet long, 4 feet wide and 16 inches deep.

The enclosed honeybees had been making the cavity their home since 1996, while hardly bothering the homeowners. The cabin was rarely in use, but when the owners need to occupy it while building another home nearby, they decided it wasn’t safe for their two children. A few bees had found their way inside the cabin and the hive was just outside the children’s bedroom so it was best to call the beekeeper, as they didn’t want to kill the honey bees, while recognizing a species in decline that does yeoman’s work pollinating flowers and crops.

So they called Bachman, owner of Deseret Hive Supply, a hobbyist store that can’t keep up with demand for honeybees. Bachman used a vacuum cleaner to suck the bees into a cage. “It doesn’t hurt them,” he said. “It’s the biggest one I’ve ever seen,” he said. The job took over six hours and the bill came to a scouring $600. “The bees were expensive,” said Paul Bertagnolli, the cabin owner, yet he was satisfied with the job.

Utah calls itself the Beehive state, a symbol of nature’s conscientiousness. Whether this was Utah’s largest beehive is unknown, but Bachman said it would rank high. Honey bees are gentle creatures unlike their foe yellow jackets and hornets, which attack rip apart and destroy the honeybee. Most people never get stung by a honey bee as they seek and collect nectar and come back to their respective hive.

The hive is now in the beekeeper’s backyard and is reportedly doing well.