What You Need to Know about a Bee Swarm 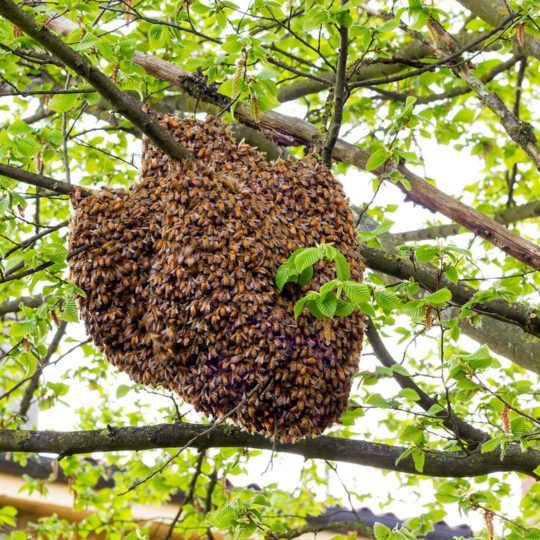 Does a buzzing, flying ball of bees have you nervous? While your first instinct might be to run inside for protection, this group is not as threatening as they might seem.

The bee swarm makes way for the queen.

Honey bees swarm when they are forming a new colony. This usually happens for about for two- to three-week period in the springtime.

During the prime swarm, approximately 60% of worker bees—thousands to tens of thousands of them—escort the queen from the original hive location. First, they spend some time close to the original hive while scout bees look for ideal places to call home. Once they get the report, the bees split off into two or more groups to start new colonies.

Secondary afterswarms, while rare, do occur. They tend to be smaller than the former, but their job is also important—escort virgin queens to the new location.

A bee swarm is usually not aggressive.

Swarms don’t have many developing bees to defend the group, so they are much more concerned about finding a new colony than you. Of course, if you are perceived as a potential threat, they will act to protect the queen. It’s best to view swarms from distance.

While that swarm might make the bees look like they’re thriving, bee populations are declining—some bee populations, that is. The bumble bee, known for pollinating one-third of the continent’s plants and keeping farm crops alive, is said to be endangered and in need of protection. Because of its benefits in nature, bumble bees are a stinging insect that humans should not consider a pest.

Is that buzz in the air leaving you with more questions?

Give the knowledgeable pest professionals at Green Pest Solutions a call at 877-636-9469. Whether you’d like to steer the hive away from your yard or create an environment that can help bees thrive, we’re here to help. Contact us today.