Don’t ignore infestations–face them head-on by calling on the experts at Green Pest Solutions. With more than 100 years of experience, our technicians provide superior extermination services throughout the Millville community and deliver results using eco-friendly methods and first-rate customer service.

Green Pest Solutions Rated 4.8 out of 5 stars based on 12 customer reviews

Powered by Nearby Now

only receiving outdoor service tried to set up schedule several times with no change .no one is home on day of service so inside of home not getting done .however i am being billed for it


Hi John! Thank you for your feedback on service. We truly appreciate you taking the time to talk this over with our Customer Service Manager today and get your concerns address and corrected to make this a 5 star service for you! Please let us know if there is anything else that we can do to help.

Johnny M. the technician went above and beyond during my visit today. Green pest is so fortunate to have such a wonderful, knowledgeable and caring employee on your team! Good help is hard to find now but you hit the lottery with him! Absolutely amazing!!!


Hi Tammy, thank you for the 5 star review on the amazing service by Johnny!

I am so happy to have called Green Pest. Dani was so professional and answered all of my questions, it is clear she is very knowledgeable and experienced, and she loves her job which made me very comfortable.

The technician was great on explaining every thing he did


Hi Terry, thank you for the 5 star review on our great service including the technician explaining everything he did! 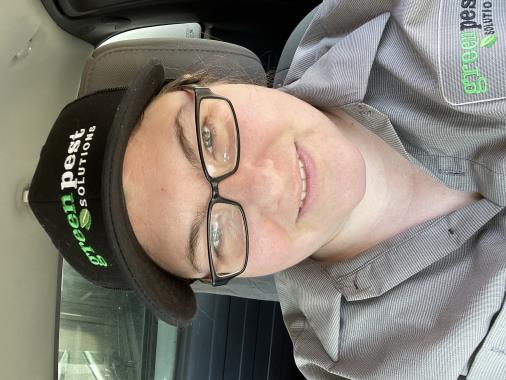 Hello! Today I performed your quarterly pest service. It’s good to see the overgrowth in the back of the property trimmed back and cut down significantly.I maintained exterior rodent bait stations and inspected the exterior of the building. I then treated the perimeter foundation with a liquid residual product for General pest control. I did not note any pest activity at this time and the exterior of the home as well as landscaping looked to be in good condition. Please allow 10 to 14 days for any applicable results.Thank you for choosing Green Pest Solutions. If you have any questions please do not hesitate to contact our office, thank you and have a wonderful day!

Hello! Today I was here for your initial pest service. The main issue is roaches.In both homes I started on the interior, using a gel bait throughout kitchen, cabinetry, appliances, and molding. I then used a liquid residual product along baseboard level, cracks, and crevices throughout the entire home, including first floor and second floors.On the exterior, I treated the perimeter foundation of the building with a liquid residual product for General pest control. during treatment I knocked down some mud dauber nesting, as well as brushed down spiderwebs. You may see an uptick in cockroach activity over the next 24 to 48 hours as treating can sometimes flush them out of cracks and crevices. I would wait approximately 24 to 48 hours before wiping down and cleaning out the cabinets and replacing items. Applicable effects can sometimes take up to 10 to 14 days. I am recommending we come back for a two week follow up. We will also then be back in approximately 30 days from today as well a

Hello! Today I was here for your initial pest service. One of the main concerns is mice as well as ants.On the interior of the home, I placed three small rodent bait stations, one in the kitchen and two in the basement. I’ve been treated baseboard level, cracks, and crevices through all three floors with a liquid residual product for General pest control.On the exterior, I brushed down any spiderwebs and inspected the exterior of the home. I then treated the perimeter foundation of the home with a liquid residual product for General pest control. During treatment, I placed a gel bait for ants, and some of the deck, edging and areas were trailing activity has been prominent. I also placed two exterior rodent bait stations on either side of the home.I did not note any glaring areas that mice could be coming into the home from, however, there is a decent amount of debris and buildup around the foundation, which can absolutely harbor activity. My main recommendation includes clearing, any

Today I completed your One Time pest service for a Hornets nest. The bald faced hornets nest in tree above driveway was treated with an aerosol. Next the hornets nest was taken down and removed. Then the area in tree was treated with a liquid residual application. Please be careful around this area for the next few hours for any remaining hornets may be a bit agitated. Allow 3-7 days to see a decrease in activity. And contact our office if you have any concerns or questions. Thank you for using Green Pest Solutions and have a great day.

Avoiding back patio and mint bushes, I treated the exterior perimeter for ants and general pests with liquid residual. Best results take effect in two weeks. Thank you and please call with any pest issues.