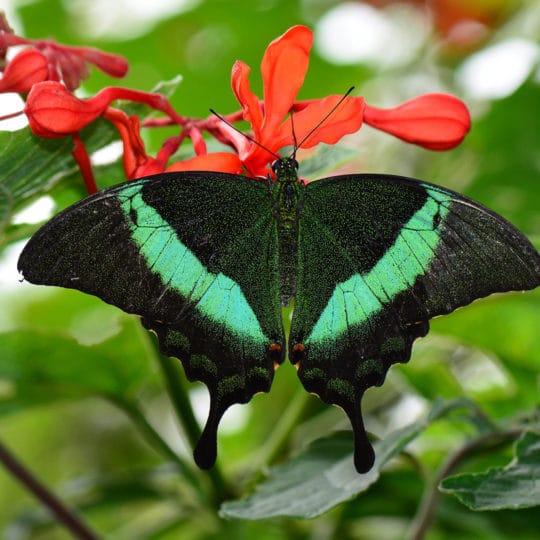 Nature can be magnificent. While we might not all agree whether or not bugs are gifts to the world, we can appreciate the beauty of some of the most colorful insects. Here are our five favorites:

Of course a butterfly was going to be on our colorful insects list! The emerald swallowtail is a member of large family of swallowtail butterflies. Its wings have shining green bands which make blue and yellow reflections. The underside of its wings are black and orange for an extra pop of color.

Not only is it one of the most colorful; it’s also one of the largest butterflies in the world! Unfortunately, their home is Southeast Asia, so you won’t find them brightening your backyard.

Buprestidae is a family of beetles known as jewel beetles and also as metallic wood-boring beetles. They get their name from their glossy iridescent colors. We’re not the only ones who love the look of this bug…the larger and more spectacularly colored jewel beetles are highly prized by insect collectors. Plus, the elytra of some jewel beetles have been traditionally used in beetle-wing jewelry and even as decoration in some Asian countries.

The jewel beetle can be found in the United States. And if this beetle is going to grace your backyard, at least it’s going to be beautiful.

Male flame skimmers are known for their entirely red or dark orange body, including their eyes, legs, and wing veins. This dragonfly varies in size—between two and three inches long—and is known for being “chubby” because of its large, round abdomen.

It is native to western North America, so, unfortunately, our clients in Pennsylvania, New Jersey, and Delaware will need to take a trip to see these beauties in nature.

In our opinion, the blue-striped nettle grub caterpillar, also known as parasa lepida, could easily be known as the Iridescent Green caterpillar because of its stunningly green body. It gets its name from the blue stripe down its back, which is also impressive.

This caterpillar is actually considered a pest because of the damage it does to trees. Fear not though—it is native to the Indo-Malayan region, including India, Sri Lanka, Vietnam, Malaysia and Indonesia.

Color and design! That’s what the beautiful orchid mantis is known for. Not only does its body look like an orchid for superior camouflage, but it can even change from pink to brown to fool predators and prey.

Once again, you won’t find this beautiful bug near your home; they can be found in Malaysia.

Are You Dealing with Ugly Bugs?

Your pest pros at Green Pest Solutions serve the Pennsylvania, New Jersey, and Delaware regions, so we know exactly what pests to be on the lookout for and how to get rid of ones we find. Our knowledgeable professionals have been in business for decades. Contact us today at 877-636-9469.