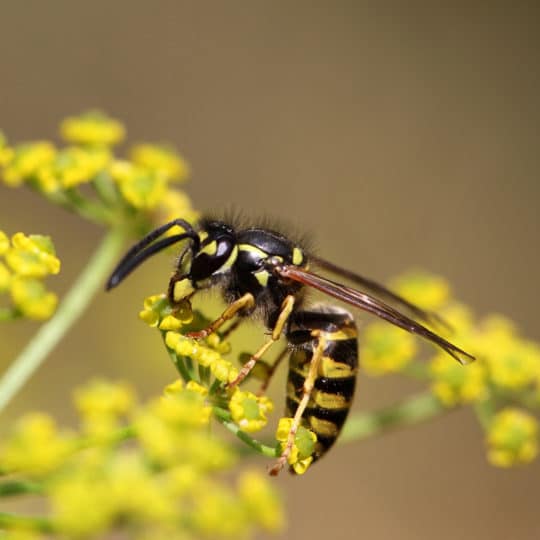 If any pest is going to scare kids and adults alike, it’s probably a stinging insect, like yellow jackets, wasps, and hornets. Learn the difference between the most aggressive stingers in our area.

Appearance: Yellow jackets are a type of wasp.These insects have a yellow and black head and patterned abdomen. You can tell them apart from bumble bees who also have the yellow and black coloring because they’re bodies are sleek and slim in comparison.

Threat: Yellow jackets are aggressive stingers. They are most threatening in the fall when their colony starts to die out. They pose a great risk to people with allergies.

Appearance: In general, wasps have a pinched waist and long thin legs that can be seen dangling below their body as they fly. Wasps have a variety of colors and make different kinds of nests, depending on the specific type.

Threat: Wasps tend to avoid humans, but they still sometimes build their nests on structures occupied by people. When humans get too close to the nest for comfort, wasps are known to attack with painful stings that cause severe allergic reactions in many people.

Appearance: Like wasps, hornets’ appearance varies between types. Some have stripes that are orange and brown while others have black and white stripes.

Threat: Hornets are aggressive attackers. They do not have a barbed stinger, so they can and will sting their victims multiple times.

Are Stinging Insects Invading Your Space?

Because of the dangers associated with removing stinging insects yourself, it’s best to use the assistance of qualified professionals. The expert pest professionals at Green Pest Solutions know how to safely remove them without causing danger to you, your family, or your pets. Call us today at 877-636-9469.