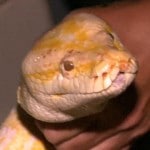 A South Florida Resident discovered a large surprise lurking in his shed Sunday night. The man found a 13-foot, 100+ pound Burmese Python. The Burmese Python had been using the shed as shelter for its home. According to Lt. Lisa Wood of Fire Rescue, “This snake is probably about 13 feet long. We measured it a little over 12 with the tape measure, but there were curves, I’m thinking 13 feet and close to 100 pounds. It’s a big snake.” Wood later explained the massive python was probably someones pet long ago, because albino pythons are popular among snake aficionados. 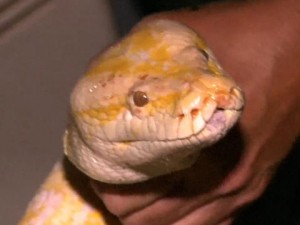 Police along with the Miami-Dade Fire Rescue Anti-Venom unit shortly arrived and safely removed the giant reptile. The discovery of the snake also led to lots of snake skin leftover inside the shed and skeleton remains of one of the homeowner’s three cats, which had recently gone missing.

The team took 5 people to hoist the snake out, which barely put up a fight. The reptile had apparently been hiding and residing beneath storage bin units in the shed. It was later bagged and taken away.

Burmese Pythons are invasive species in the sunshine state. There is a surplus of the species within the state of Florida, primarily in the Everglades regions, where they are considered dangerous to native wildlife. The sunshine state is actively looking to exterminate the reptiles via hunting and other control methods.